Once a year, in March, Saas-Fee plays host to the most spectacular mountain bike race of its kind. This year will be the 15th anniversary of the one-of-a-kind spectacle. The route follows the ski slopes from Mittelallalin all the way down to the village. The racers can reach speeds of more than 140 kilometres per hour.

Below: The top athletes are looking for every split second. Skin-tight catsuit provides the best aerodynamic advantage. 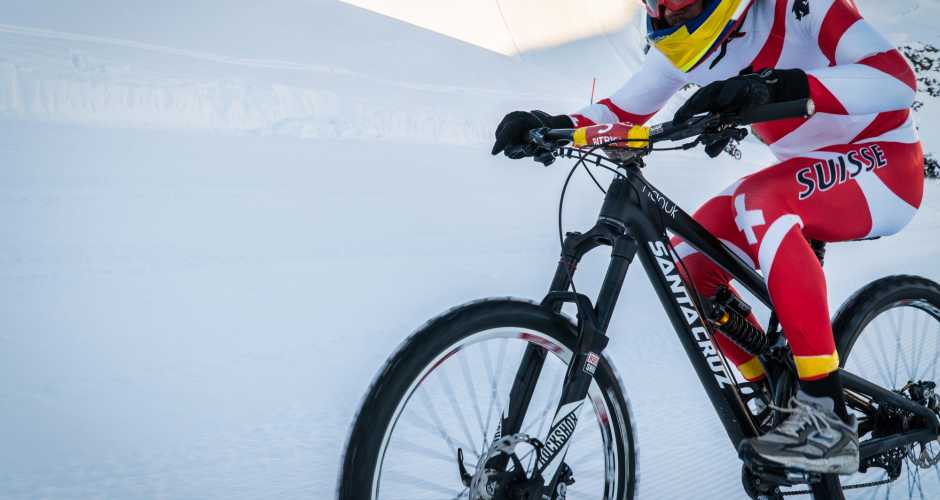 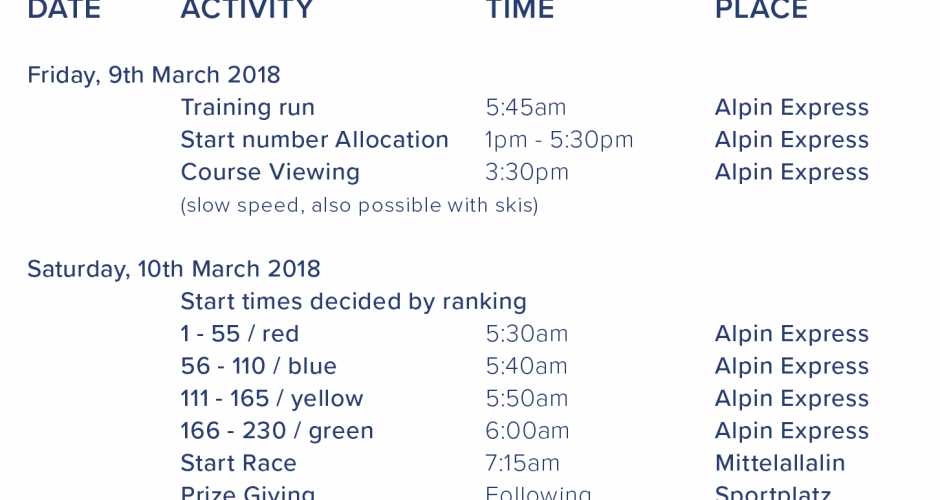 On 10th March 2018, before the slopes open for regular business, the ski area is taken over by mountain bikers. Bright and early, the Alpin Express and Metro Alpin carry the riders and their bikes up to Mittelallalin. The start is found at at 3,500 metres above sea level, there the scene is set for something truly spectacular. Beginning at 8:00am, the race sees over 200 participants sprint the opening metres to collect their bikes. The mass start in the thin mountain air is only the first of many challenges faced by the mountain bikers. "The strain on both the rider and the equipment is immense," says Bernhard Rösch, winner of the 2011 Glacier Bike Downhill. Adapting your tire pressure correctly to the slope conditions is just one of many vital factors that determines your final ranking. The brakes are not so important; on a surface as slippery as snow, those who use them too aggressively are bound to crash. Steering is exclusively controlled by shifting body weight and controlled drifting. 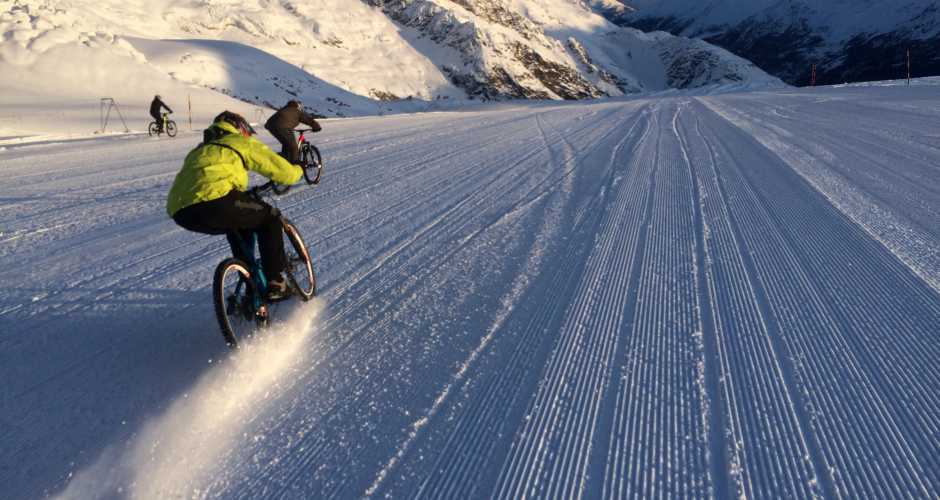 Above: Under the first rays of sunshine, the bikers race to descend more than 1700 vertical metres to the village

Above: More than 200 riders are due to line up at the start on the 10th of March for the craziest race of its kind.

TOP SPEED OF 140 KM/H
From the start at Mittelallalin, the course leads riders towards the Morenia chairlift, via the Panorama slope. That is the steepest section of the race and the top riders reach speeds of up to 140 kilometres per hour - even faster than the skiers who race in the Allalin Downhill. Past Morenia, the course winds towards the valley. Having descended 1,700 vertical metres, the downhill bikers finally reach the finishing line in Saas-Fee. The fastest riders complete this “hell ride” in about seven and a half minutes. 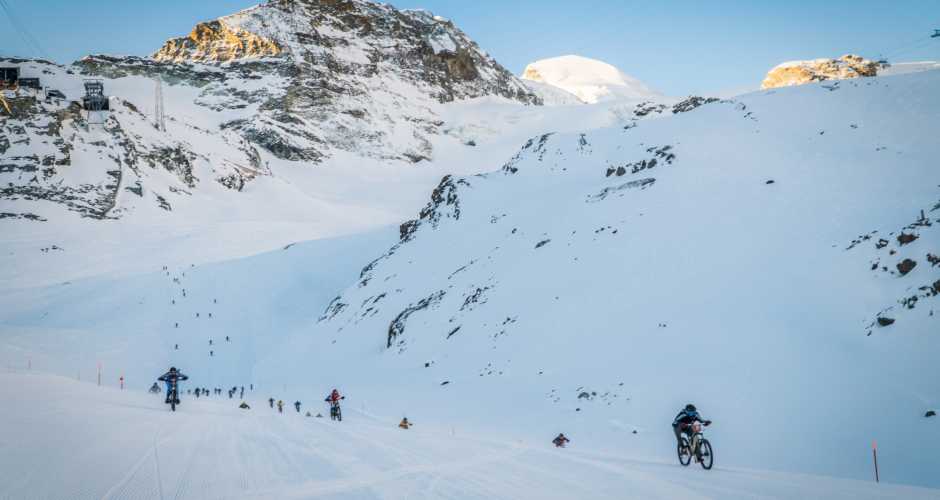 Above: The course winds down the closed ski runs, taking riders from Mittelallalin to the town of Saas-Fee. 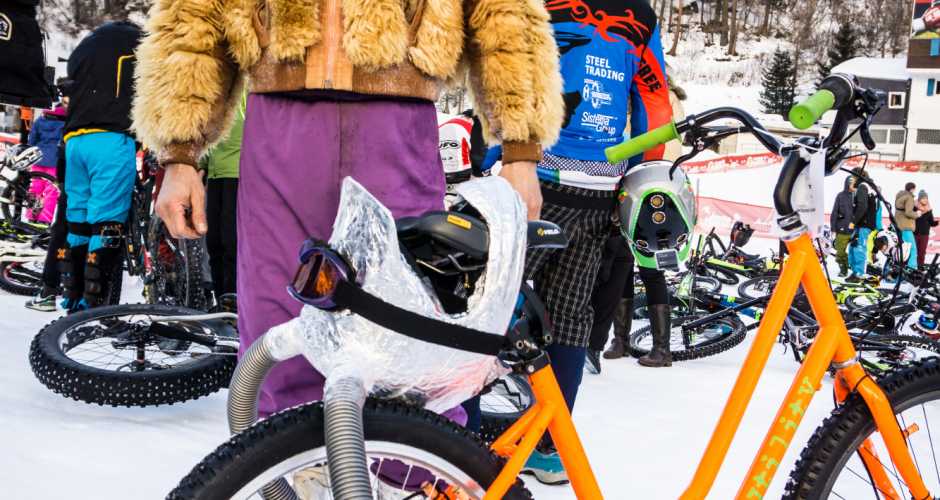 Above: Just one crazy example of a costume worn at the Glacier Bike Downhill. 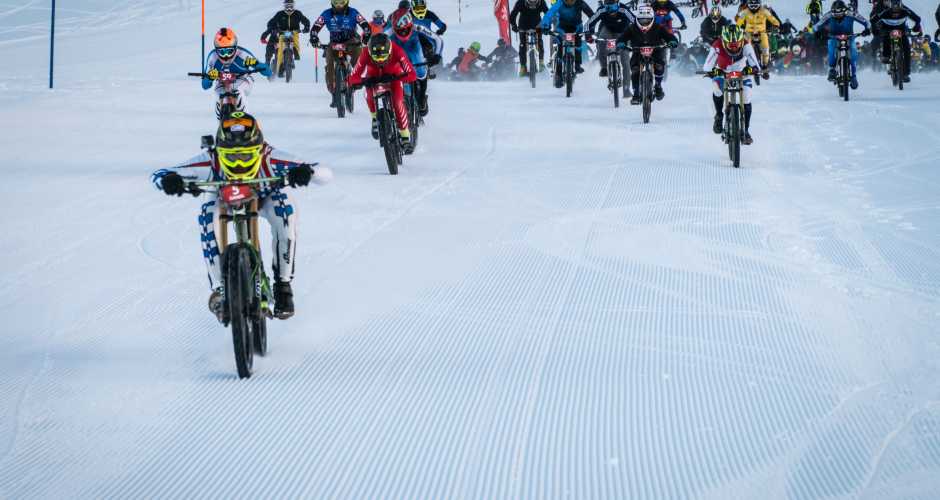