Above: The “Chalchofen” ice wall, next to the cable car station in Saas-Grund, provides the perfect starting point for beginners.

If you want to try ice climbing for yourself, you can do so under the professional guidance of the Saas-Fee Guides. Throughout the Saas Valley, more than 20 ice walls with varying degrees of difficulty await climbers.

Calmly and cautiously, Sebastian taps the ice axe into the wall. Small chips of ice come loose as he carefully repositions his crampons, preparing to take the next step. The thermometer reads minus 5 degrees Celsius this morning. We’re in the very depths of the Saas Valley, near Saas-Almagell. As swiftly as they form, small beads of sweat freeze on the 34- year old’s forehead. Sebastian, a Winterthur native, has already conquered six metres of the climb. Half of the year, this is a waterfall, but the cold has frozen it solid, forming an imposing wall of ice. Yet, there is no let off for the climber: "Good work, Sebastian! Use the crampons a bit more, and try not to put too much force behind the ice axes,” Gabriel Voide encourages him as he goes. The 37-year-old mountain guide supports his tutee throughout the ascent and giving him valuable tips as he progresses. "As always when climbing, the right technique can save a considerable amount of energy," says Voide. 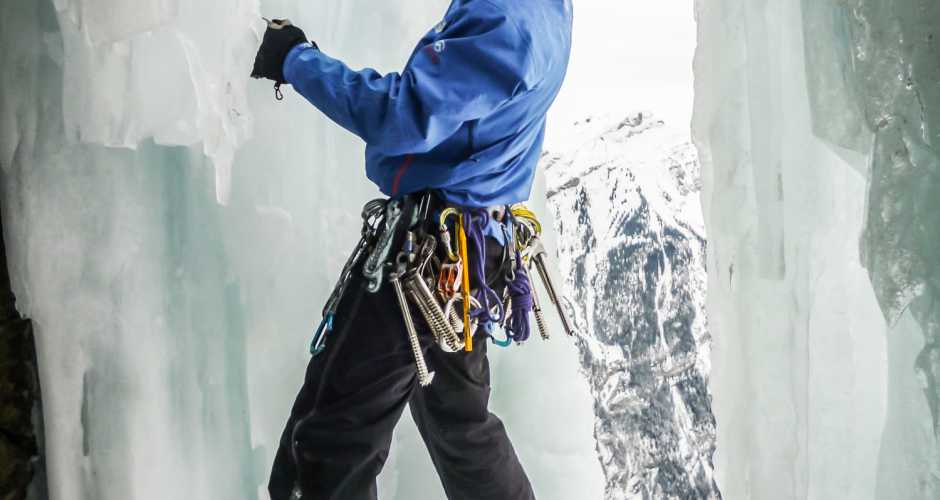 Above: Mountain guide Gabriel Voide has been climbing the ice walls of the Saas Valley for more than twenty years.

THERE ARE MORE THAN 20 ICE WALLS IN THE SAAS VALLEY
Naturally, since climbers scale ice instead of the usual rock face, different equipment is required. Ice axes and crampons are standard issue for Saas-Fee Guides AG’s clients. The apparatus has to be well-maintained: "Blunt ice axes or crampons make things difficult," advises Voide. He has been working as a mountain guide for the Saas-Fee Guides AG for 17 years, having started climbing locally at the age of seven and has now been practicing the sport for more than 20 years. He knows the ins and outs of every one of the twenty walls in the Saas Valley which make the cut for ice climbing. "The possibilities here are immense," says Voide, effusively. Something that goes for both beginnersand experts. If you want to try ice climbing yourself, you can do so under professional guidance in Saas-Grund, near the cable car station, or in Saas-Fee, in the car park itself. Beginners will learn how to handle ice axes and crampons correctly. “Fun should be paramount,” says Voide. "Although, we also want to show beginners how to ice climb safely and that you don’t freeze while doing so". Sebastian, who is on his second ice climbing adventure with Gabriel, agrees with the latter point: “I even started to sweat”. He has successfully scaled the twelve-metre-high ice wall and is now back down on the ground. Voide congratulates him: "Now you’ve got it, right?" In fact, the next day, the two plan to climb another ice face. 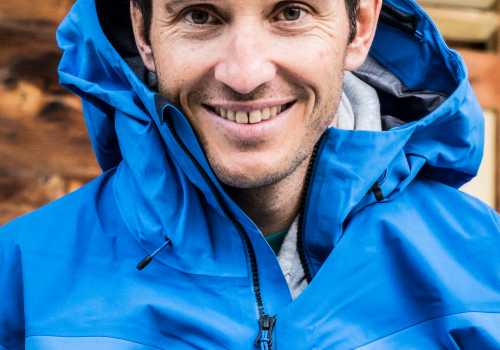 “The appeal of ice climbing lies in immersing yourself, and challenging yourself, in the bizarre world of ice.” Gabriel Voide, Mountain Guide

Above: With good technique ice climbers can save a lot of energy

Prices include the expertise of a certified mountain guide as well as the required equipment (two ice axes, crampons and a harness). The guide will also provide any other necessary equipment. 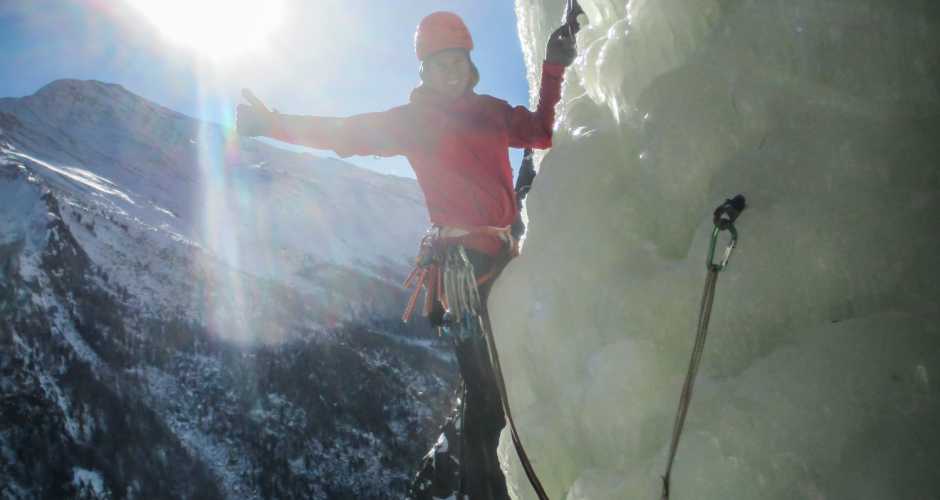 Above: More than 20 ice walls, of varying levels of difficulty, await climbers in the Saas Valley.