Above: Dawn under the Allalin. The park shapers put the final touches on the kickers before the world’s best freestylers take to them for training

The guest list for Saas-Fee’s summer ski area reads like a who’s who of the winter sports elite. No less than 41 medal winners from the 2018 Olympic games made it a regular training ground. 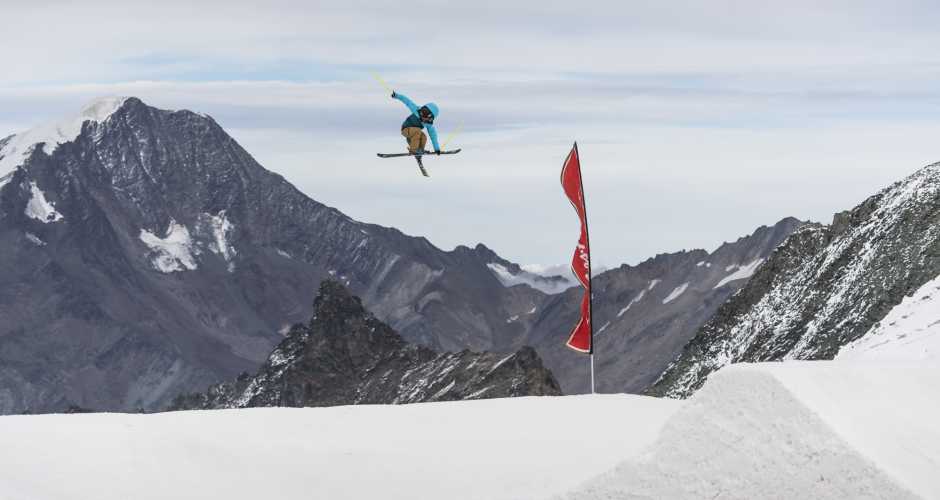 The smell of freshly cut grass drifts through the air. The sports ground, a winter meeting point for ski instructors and their students, now plays hosts to the local kids’ football training sessions. Beside them, teenagers dive left and right in the sand, in committed attempts to return a beach volleyball. It’s early August, and although the snow of Saas-Fee’s winter may seem far away, in reality it’s only 1,400 vertical metres above the bustle of summer. In mid-July, the glacier ski area below Allalinhorn opens and ski teams from all over the world travel to Saas-Fee to take advantage of some of the best training available in those barren summer months. However, Ramon Zenhäusern, twenty-six, travels in from just 45 minutes away. In 2018, Ramon, who hails from Bürchen, Valais, brought home an Olympic silver medal in slalom and gold in the team competition. He’s been a regular on the glacial slopes of SaasFee since he was 13 years old. "Being able to train here is a huge advantage for the Swiss team," says Ramon. As time goes on, Northern Hemisphere options for essential summer training are becoming few and far between. With the retreat of glaciers throughout the Alps, most summer ski resorts have had to close down, a situation which is echoed across North America. Even Saas-Fee is not immune: in the 90s, the summer ski area was forced to shift upwards to almost 3,500 metres above sea level. In part, this move was facilitated by the opening of the Metro Alpin in 1984, originally built to serve the resort’s new - and higher - ski area at Mittelallalin; but crucially, the old summer slopes between Egginger and Felskinn had become unusable due to glacial retreat. 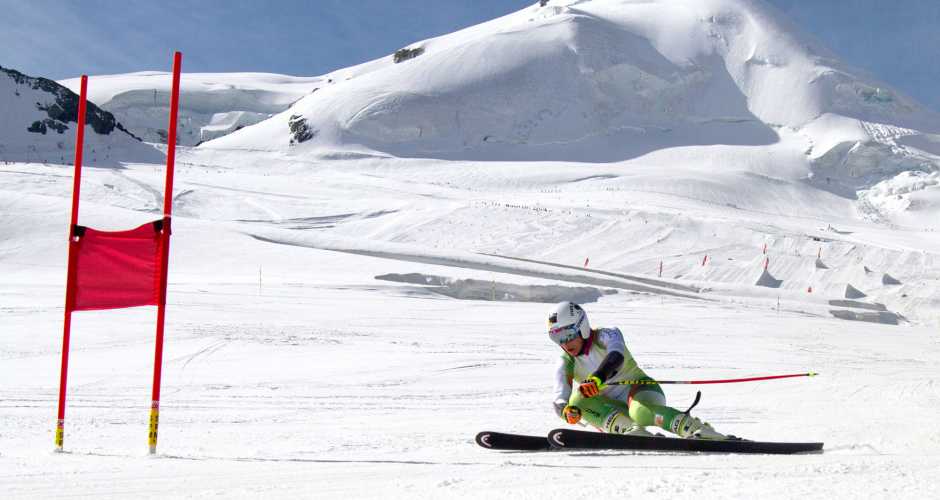 A SUMMER OF 4,000 GATES
In the summer, hundreds of red and blue poles protrude from the ice of the Fee Glacier. A daily ‘stock exchange’ decides which team trains where and at sunrise, the respective coaches start marking out training courses. Eighty race teams from all over the world train side by side. Stars like slalom pros Henrik Kristoffersen, from Norway, and Andre Mhyrer, from Sweden, train right next to the local junior hopefuls. Ramon Zenhäusern spends each and every summer training on the Fee Glacier, lapping 4,000 gates day in day out. "Together, the terrain and snow work to simulate World Cup race conditions all summer long," he explains; and his medals show that advantage can be decisive in the fight for hundredths of a second. 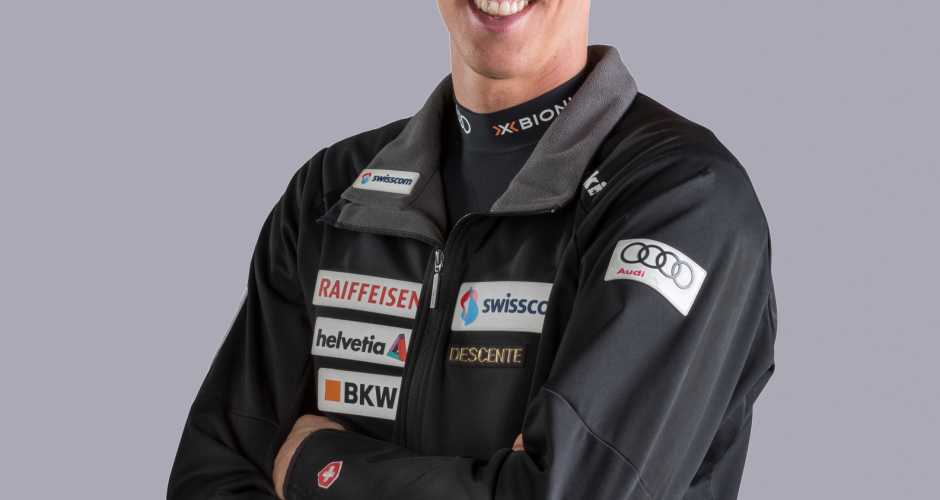 "Being able to train here is a huge advantage for the Swiss team," Ramon Zenhäusern, Two-time Olympic medal winner 2018

RAPID PROGRESSION
Speed is not the only ambition to be found at the foot of Allalinhorn. Impressive mounds of snow form the jumps, halfpipe and staircase-like obstacles of the summer snow park, features which are to a freestyler what slalom gates and startlines are to a racer: their stage. But rather than racing the clock, competitive freestylers battle for points; the more challenging the tricks and the better their execution, the higher a run scores. Season on season, the difficulty of the tricks attempted is stepped up, and skiers without something new to show risk getting left in the dust. Combinations of three flips and four rotations in a single trick have become par for the course in the repertoire of most professionals. In part, the rapid development of snowboarding and freeskiing is fueled by ever-growing parks. When Snowboarder Gian Simmen won a 1998 Olympic gold in Nagano, Japan, the halfpipe stood at just three and a half metres high. Nowadays, the walls of a pipe rise to almost seven metres. However, since construction and maintenance relies on specialized machines, it doesn’t come cheap. As a result, snowsports professionals are finding it increasingly difficult to find suitable parks to train in. In fact, come early autumn, the Fee Glacier is home to the only usable half pipe in the whole of the northern hemisphere. So it's no surprise that superstars like Swiss snowboarder and 2014 Olympic champion Iouri Podlatchikov, and US freeskier and American double Olympic champion David Wise (2014 and 2018), decide to make Saas-Fee their base for preseason practise. 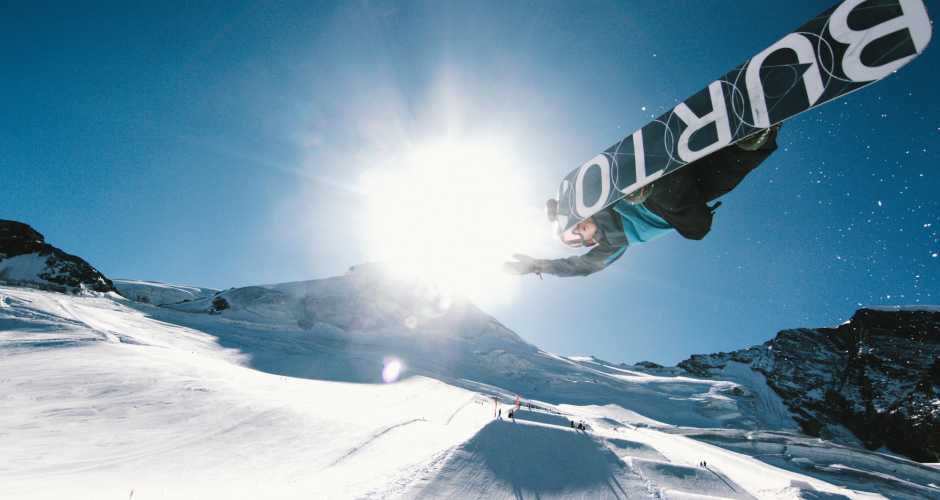 Above: US snowboarder Redmond Gerard was a surprise Olympic gold medalist in Snowboard Slopestyle. He, too, spent his autumn training at the Stomping Ground Sessions in Saas-Fee. 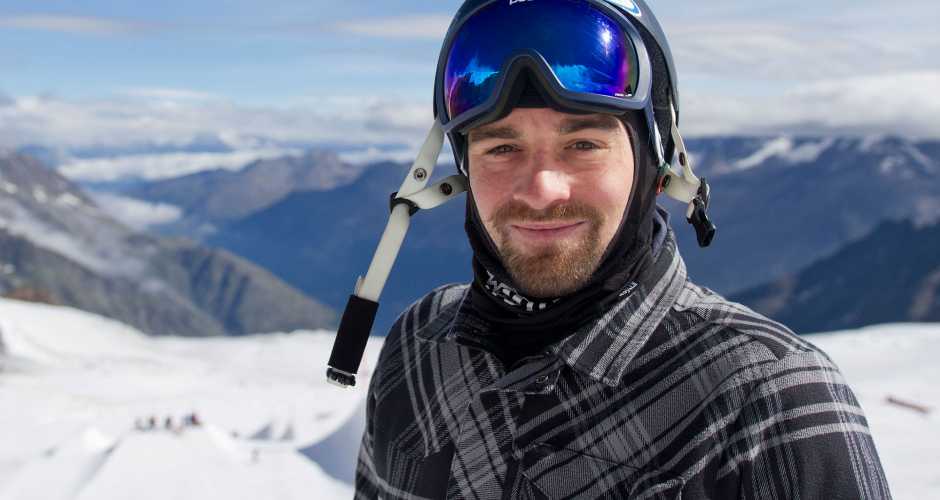 "This summer snow park is one of the best in the world." Jonas Hunziker, Olympic Athlete 2018

600 HOURS TO BUILD THE PERFECT PARK
A team of four snowcat drivers takes care of the maintenance and construction of the summer snow park. On top of which, a sizeable team is employed to apply the finishing touches manually, equipped with rakes and shovels. "It never gets boring," says thirtythree-year-old Kobi Würsch. The trained joiner and passionate snowboarder has been building jumps for the world's elite with snow and ice for years now. "I can truly express my creativity at work," says Kobi of his “dream job”. Before opening the summer snow park in 2017 Kobi and his team put in around 600 hours of labour, 500 of them with the Snowcat, to get the various elements built to perfection. The commitment they display is clearly appreciated by the athletes, "this summer snow park is one of the best in the world," claims freeskier, Jonas Hunziker. Last February, the Bernese Oberlander accompanied his team to the Olympic Games in South Korea, and finished tenth in Slopestyle. Sarah Höfflin and Mathilde Gremaud, who also call Saas-Fee’s summer park their training ground, claimed gold and silver medals respectively in a double victory for Switzerland. Jonas sums it up well, explaining that "the team’s success in recent years is largely down to the outstanding summer park at our disposable in Saas-Fee". 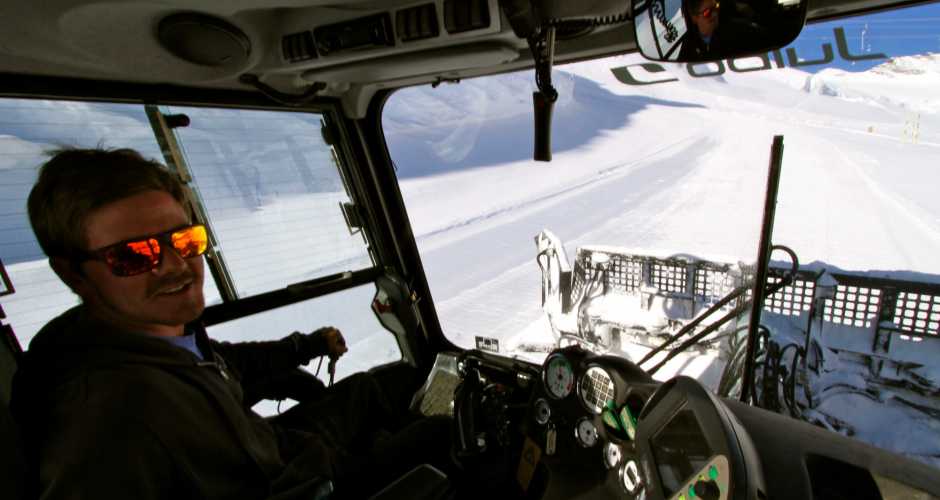 "I can truly express my creativity at work," Kobi Würsch, Park Shaper 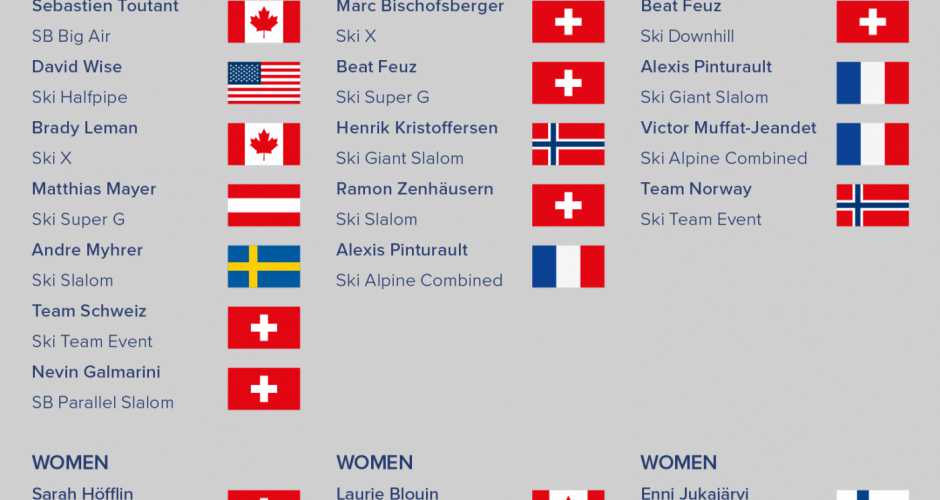