Above: The Saas-Fee Guides offer mountain bike tours on the hidden trails of the Saas Valley.

He smiles through the dust his bike has kicked up around him. As summer dawns, what were once untracked powder slopes for freeriders turn into perfect dusty trails for mountain bikers. What makes for the ideal bike trail? It should be technically demanding, but above all, have proper flow. That’s the magic combo for fortythree-year-old Martin and his buddies. The group, all family men hailing from the Bern area, often meet up to ride; sometimes in Emmental, sometimes in Graubünden. "No matter where we go, the most important thing for us is that the flow is just right," says Martin. The Saas Valley hasn’t always been on their radar, but now that it is the friends, thirty-eightyear-old Ueili tells us, find it "hard to believe that we were the only ones here today”. The Hohsaas cable cars carry bikes all the way to the top, making biking at over 3,000 metres a breeze in the Saas Valley. From here, a descent of over 1500m takes you all the way down to Saas-Grund, along one-and-a-half-metre-wide paths, meandering through the winter ski area, set among eighteen pristine snow-covered four-thousanders. What the gondola saves in terms of a rider’s energy, the snaking paths certainly demand from their riding skill. What’s more, those who are willing to shoulder their bikes and climb a few vertical metres will discover yet more possibilities. 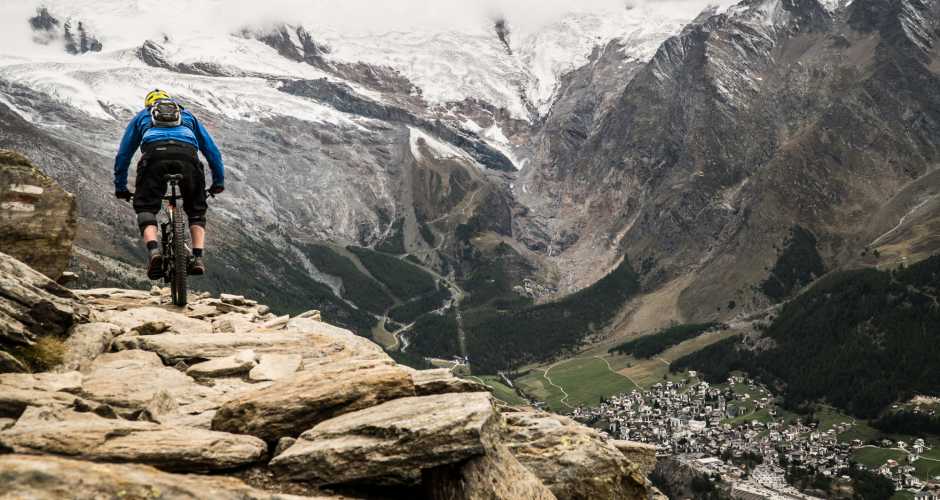 Above: The network of rideable trails in the Saas Valley extends for 150 kilometres.

ENDURO TRAILS INSTEAD OF BIKE PARKS
Terrain which was considered unrideable a few years ago is now actively sought out. Of course that’s partly down to ever-advancing bike design and quality. But not entirely. The last few years have borne witness to a clear shift in the focus of the bike scene: away from artificially designed bike parks with their wooden ramps, towards untouched trails and their more natural settings. Enduro is fast becoming the dominant discipline in mountain biking, a trend confirmed by taking a look at downhill events where participation numbers have stagnated and even declined in some cases. Meanwhile, at Enduro events numbers are steadily growing. 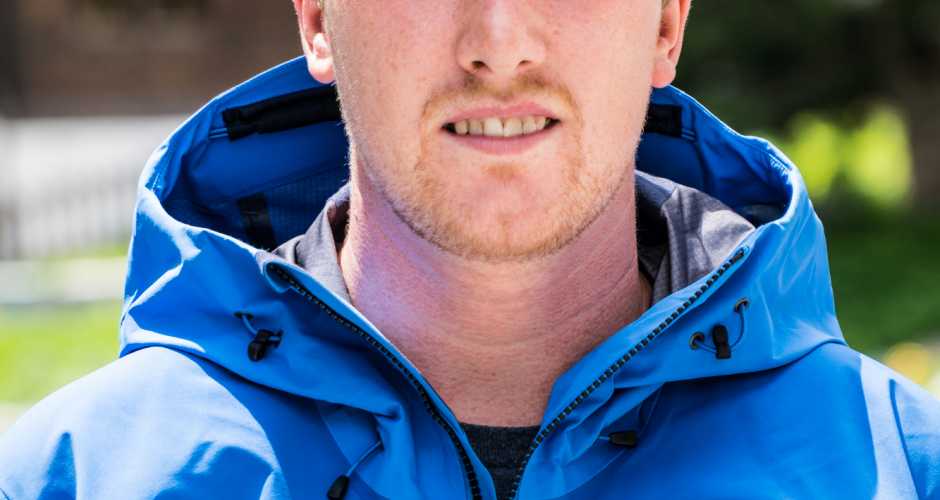 WHAT MORE COULD YOU ASK FOR?
Beyond the reach of the valley’s gondolas, there are many hidden treasures waiting for trail enthusiasts. Full downhill mode might only be an option during March’s Glacier Bike Downhill (see One Hell of a Ride, Saas-Fee Guides Magazine issue no. 1) but nevertheless, the Saas Valley boasts around 150 kilometres of trails to keep bikers entertained. For those willing to hike, the options are endless. "At the beginning, the possibilities really blew me away," admits twenty-five-year-old Kyle Harris, now a bike guide with the Saas-Fee Guides. The Scot first came to the Saas Valley in 2016 and immediately fell in love: at first with the mountain peaks and snowboard descents, but he soon discovered the valley’s exquisitely tangled bike paths. Kyle’s roots as a BMXer certainly come in handy on the tricky, winding routes. Back home in the village of Kirriemuir, northeastern Scotland, Kyle and his friends spent time in the woods, building jumps to hit on their BMXs. Soon enough, a friend introduced him to bigger bikes and racing. Finally, after completing a bricklaying apprenticeship, he had saved enough money to buy his first mountain bike. "I don’t want to think about how much money I spent on rental bikes before that," says Kyle, laughing. 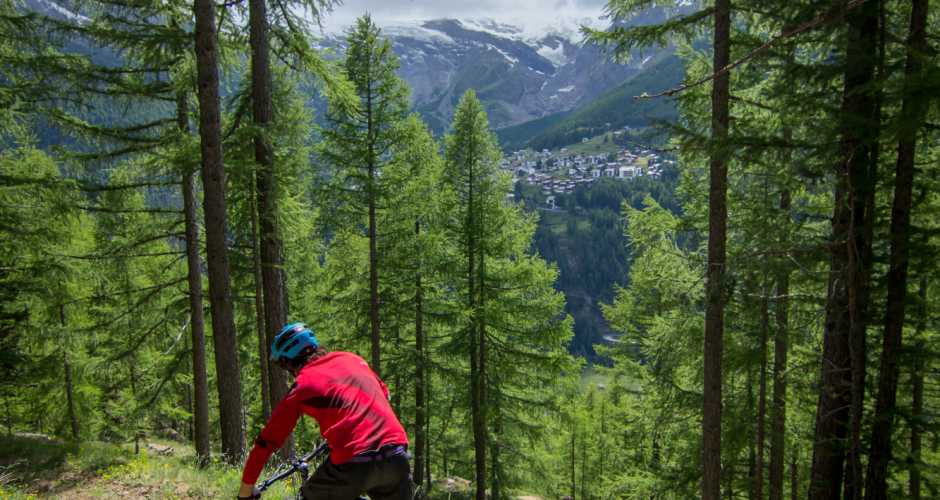 Above: A descent of 1,500 vertical metres in a single trail: the norm in the Saas Valley. 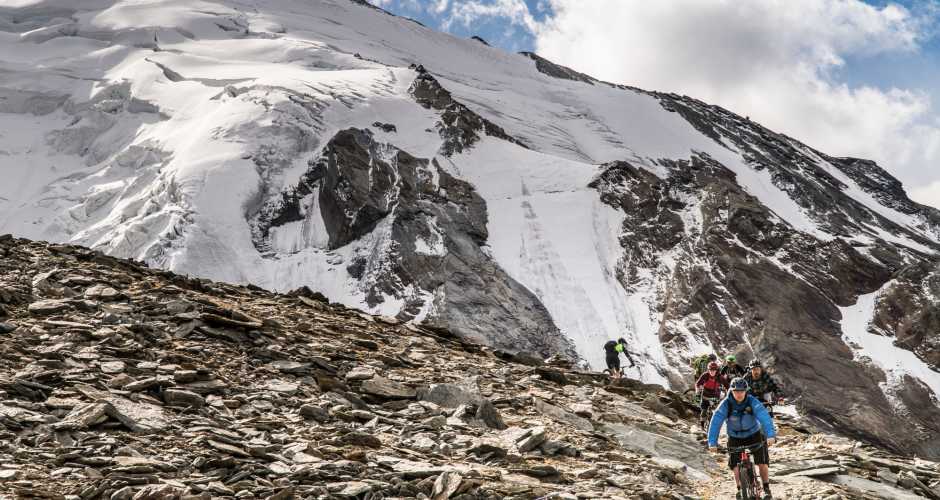 Above: Trails to Saas-Grund begin at the Hohsaas gondola top station, at over 3,000 metres above sea level.

THOSE IN-THE-KNOW ARE IMPRESSED
Kyle doesn’t much miss the soggy trails and dense forests of his homeland: "Everything here is much more open and natural. We are so lucky." Renowned bike magazine, Ride, certainly agrees; and with a circulation of 14,000 copies, it is the most influential bike publication in Switzerland. Their editors recently devoted twelve pages to their trip to the Saas Valley last autumn. "While other regions are having to reach deep to create enough trails to keep guests interested, everything is already here," say the folks from Ride. We have the valley’s long history of settlement to thank for that: for centuries, pastoralists and mule-drivers - as well as the sheep and goats - have been trail builders, determinedly clearing their way to the alpine pastures. Today, local councils, mountain guides and those operating the SAC mountain huts share responsibility for taking care of the paths. And unlike with traditional destination bike spots, overcrowding not an issue on the Saas Valley’s trails. Just like the Bernese group we interviewed, the Ride editors were baffled that they didn’t come across more mountain bikers with the same idea, "if only people knew what was on offer here”. 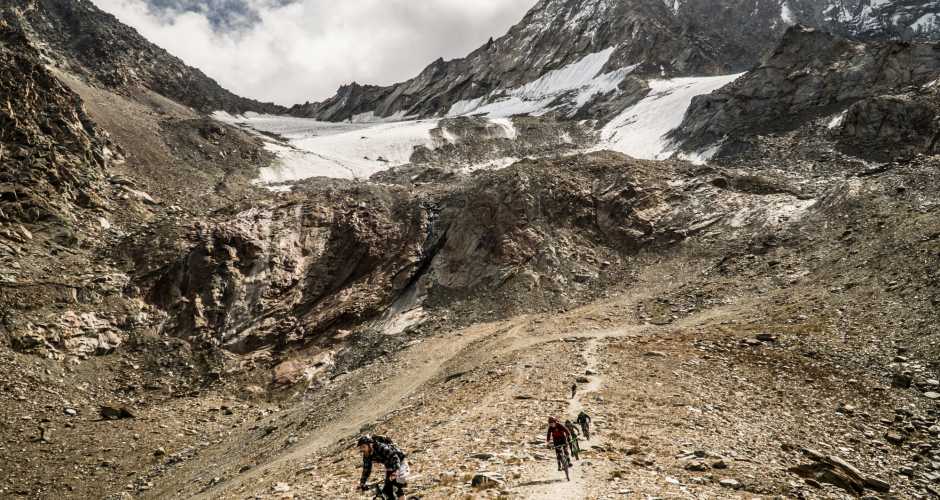 Above: High alpine riding in Hohsaas

GOOD TO KNOW
If you would like to discover the hidden biking gems of the Saas Valley for yourself, it’s best to start with a guide. Prices start from CHF 30.- per person per hour (maximum six per group) and CHF 80.- per hour for private tours (for 1 to 2 people).