The Mischabel Hut marks the starting point for attempts to summit of some of the most imposing peaks in the Alps. Maria Anthamatten has been running the hut, which sits at 3,300m, for eight years. According to the Almagell-native every day spent there is a privilege, despite the hard work... 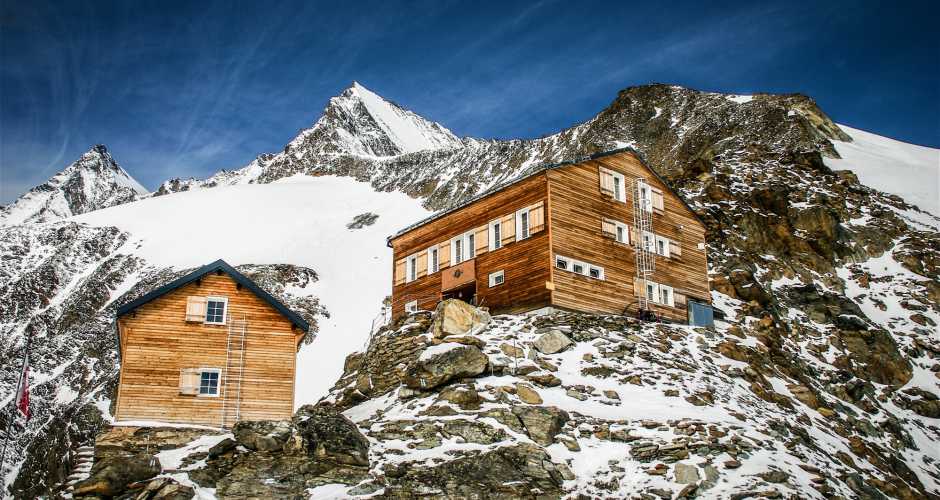 Above: The Mischabel Hut opens mid-June through mid-September

The autumn of 1858 proved an exciting time for alpinism and for tourism in the Saas Valley. In the space of a week, the summits of two of Switzerland's highest mountains were reached for the very first time. On the 16th of September a four-man party, made up of Franz Andenmatten, Baptiste Epiney, Aloys Supersaxo and Joseph Zimmermann, claimed the first ascent of the 4,327-metre Nadelhorn. Just five days earlier, Johann Zumtaugwald, Johann Kronig and Hieronymous Brantschen, alongside J. Llewellyn Davies, an original member of the British Alpine Club, had become the first to set foot on the summit of the Dom. Having climbed to 4,545 metres, the group had reached not only the highest point in the Mischabel mountain chain, but also the peak of the highest mountain situated entirely within Switzerland. 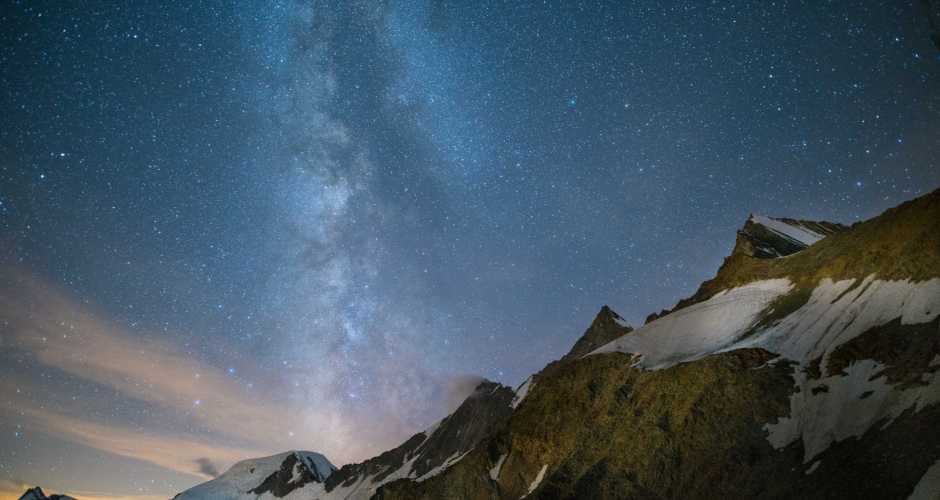 Above: A magical night sky over the Mischabel Hut.

HUMBLED BY THE MOUNTAINS
160 years on, the peaks of the Mischabel group and the Nadelgrat to the northwest are just as captivating as ever. “Even for the Saas-Fee Guides, experienced and highly trained mountaineers, it is an overwhelming feeling to bask in the first morning rays on top of these magnificent 4,000-metre peaks”, recounts Danny Stoffel, a mountain guide from Saas-Grund. "There are very few places where you are made to feel so small and humbled - as a human being - as you are on the summit of the Nadelhorn," he continues. The ridgelines of the Mischabel group, including that which runs from the Nadelhorn to the 4,294-metre-high Lenzspitze, are among the absolute highlights of any mountaineering experience in the Alps. On the Saas Valley side of the Mischabel group, the Mischabel Hut is the ‘base camp’ most commonly used for these condition-dependant and technically challenging high altitude tours (see "Good to Know"). In reality, said base camp is formed of several Mischabel Huts. After four years of planning and construction work, the first hut opened in 1903 on the northeast ridge of the Lenzspitze. Local mule drivers transported building materials via the steep and narrow paths above Saas-Fee. The forty-two bed hut, run by the Academic Alpine Club of Zurich, soon proved to be too modest in size. Even after an expansion to sixty berths and the tourist industry downturn that accompanied the Second World War, the hut was regularly pushing maximum capacity. Eventually, in 1976, they built another hut altogether, and now the stunning location boasts an impressive 130 beds. 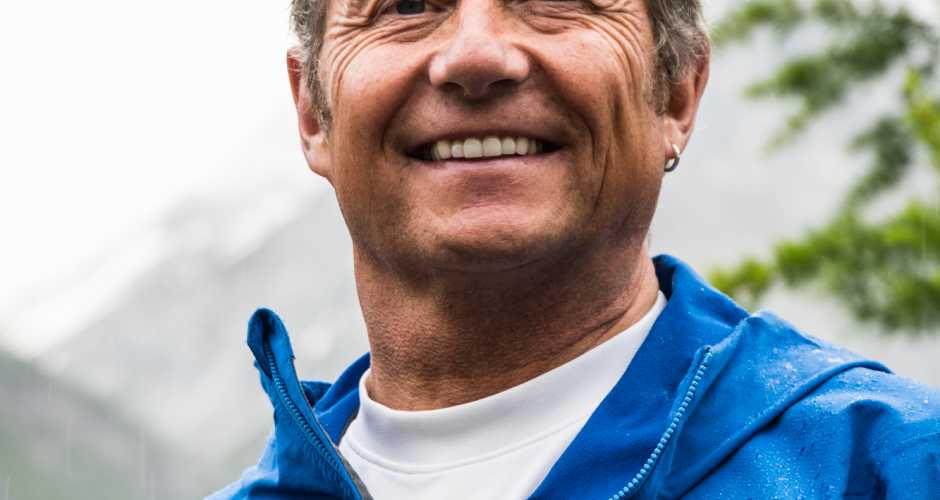 "There are very few places where you are made to feel so small and humbled - as a human being - as you are on the summit of the Nadelhorn” Danny Stoffel, mountain guide

A HUT MANAGER NAMED MARIA
Today, Maria Anthamatten, thirty-five, runs the entire operation. Having spent eight seasons in the role, it is apparent that her work, and mountain-life itself, are her calling. It’s little surprise, the lifestyle runs in the family: her grandfather, mountain guide Alfred Anthamatten, used to manage the Almageller Hut, which has now been taken over by Maria’s uncle Hugo and his family. As a child, she helped out at the Almageller Hut. Although she is a professionally trained nurse, and still works at a hospital in Visp throughout the winter, her application to take charge of the Mischabel Hut was quickly accepted. From mid-June through midSeptember, Maria, alongside three live-in employees, take care of the mountain hut’s many guests. It’s much more than a full-time job... The first guests rise for breakfast at half past two in the morning, by ten o’clock the first climbers will be returning from their tours, and the work day often continues until well past ten at night. Working in such a remote location is complicated affair: supplies must be brought in by helicopter, the only vehicle which can access the hut; and although some electricity comes from solar power, the kitchen relies on six gas hobs and a wood-fired oven; on which, the team - humble in numbers but not in capacity - prepares meals for up to 130 people at once. Once breakfast draws to a close, they ready the place for an influx of day guests walking up from Saas-Fee - around four hours away - and from Hannig – a hike of around 3 hours. "As you can imagine, our days are pretty intense," Maria says, smiling. "But with the right team, it doesn’t often feel like work”. 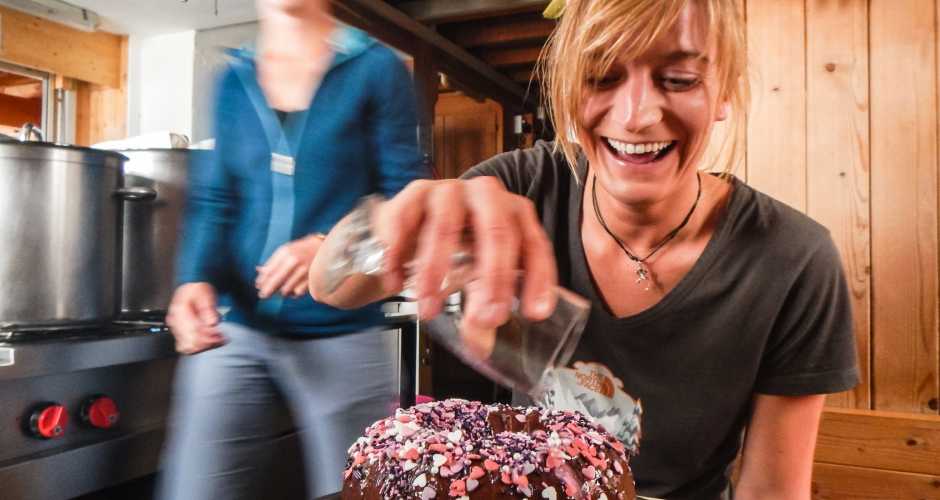 Above: Maria Anthamatten is in her eighth season as a hut caretaker

LIFE’S STRESSES ARE LEFT BEHIND
In addition to their daily duties, the team at the Mischabel Hut is responsible for maintaining its water supply, the majority of which is sourced from the glacier above. At the start of each season, this requires Maria and her team to dig through up to five metres of snow to get the water flowing. Pipes, which must be checked daily thanks to the ever-moving glacier, run directly to the 20,000-litre on-site tank, and rainwater is collected from the roofs. The commitment is almost non-stop, with Maria working for three consecutive months without returning to the valley, in a job which leaves little room for personal time or space. Nevertheless, the hutkeeper-at-heart is sorry to see the shutters close at the end of each summer season. "Most of my friends wouldn’t trade places with me for anything” reveals Maria, “but for me, it’s such privilege to be able to spend my summers up here". The sunrises alone make it worth every minute of hard work. “It’s as though all of life’s stresses are left behind in the valley”. 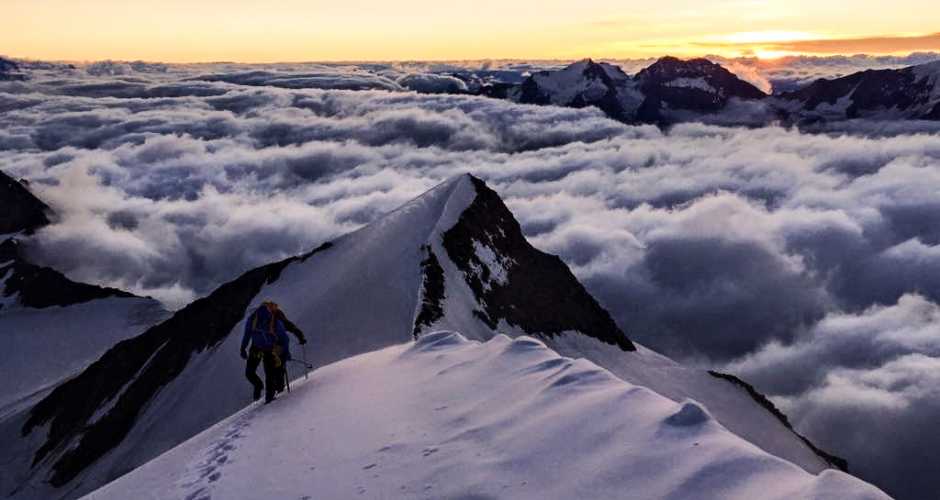 Above: Climbers set off on high-alpine summit attempts first thing in the morning, making the sunrises all the more spectacular.

MISCHABEL HUT
The Mischabel Hut is an especially worthwhile destination for mountain hikers. While the approach is well signposted and made safe with steps and wire ropes in exposed areas, it still provides a challenge. Sturdy shoes are an absolute must, you should be confident walking in high alpine terrain and have a good head for heights. The route is unsuitable for children and dogs. It takes about four hours to walk from Saas-Fee to the Mischabel Hut and about three from the top of the Hannig gondola. Half-board accommodation at Mischabel Hut starts from CHF 56.00 for under-eighteens and members, and CHF 83.00 for adult nonmembers. Hüttentee is provided and further provisions can be ordered.

SCALE THE NADELHORN
In ideal conditions, the Nadelhorn, which owes its name to an oval hole just below the summit, is one of the easiest ascents in the Mischabel group. That said, reaching the summit still requires a good degree of physical fitness, as well as adequate experience with crampons. The ascent from the Mischabel Hut takes an estimated four hours and involves a climb of over 1,000 vertical metres. The descent along the same route takes two and half hours. On this tour, there is a maximum group size of two per mountain guide. For two climbers, the price is CHF 485.- per person, and for a solo climber with a guide the tour costs CHF 880.- . The required overnight stay in the Mischabel Hut - for you and your mountain guide - comes as an additional cost (estimated overnight fee for guides CHF 40.-)