Above: Eugenia Aleseeva for the UIAA

Nowhere is the audience as close to the action as at the Ice Climbing World Cup in Saas-Fee in January. For the best ice climbers in the world, the event in the car park is a highlight of the tour calendar.

Up to 1,800 cars can be found at the village entrance of Saas-Fee. The car park is anything but a jewel. A round concrete block with ten floors. A functional building from the late 1970s. Yet the multi-storey on the edge of the car-free ski resort has a special feature: each January the core of the building hosts a special event, the ice climbing world cup, where the best ice climbers in the world meet to battle for the top sport of the podium. The course is 32 meters high, scattered by ice blocks, tree trunks and rock sections. It is the only World Cup event on the tour calendar, which is not held in the open air. More than 2,500 spectators watch the competitions from the bottom floor or lining the edge of the spiral ramp, which connects the 10 floors of the car park. In addition to the sporting program, this tour stop in Saas-Fee is also notorious for the after-parties held on the bottom floor of the car park. Entertainment is provided, not only by the live bands and Dj’s who play into the early hours of the morning but also from professional and amaateur climbers alike who traverse the holds placed across ceiling to the bar in order to claim their prize of a free beer for their efforts. As you can imagine, this does not alway end in success! 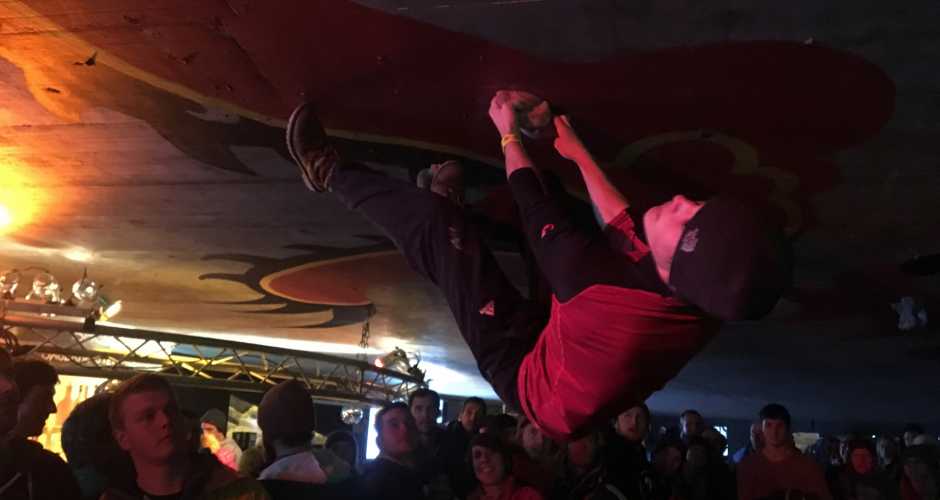 Above: A professional climber shows off his skills during the legendary afterparty in the Saas-Fee car park.

Soon at the Olympics?
It all started almost 20 years ago. In winter the water freezes on the concrete walls of the car park. After the first climbing attempts, the decision was made to stage a professional event. Today the ice climbing in the centre of the multi-storey car park is an integral part of the events calendar in the Saas Valley. Top athletes from Switzerland and all over the world come to Saas-Fee. Hee-Yong Park, the winner in 2017, says he loves coming to the event: "The mood here is just fantastic," says the South Korean. Also for the 2018 event, top athletes from all over the world have registered again. The sporting level has been world class in recent years. This has already brought ice climbing onto the radar of the International Committee IOC. Climbing celebrates its inaugural outing at the Olympic Summer Games in Tokyo 2020. The winter event may yet follow.